It’s time to share another gorgeous dessert that’s sure to go in your cookbook. These are baked pears with ricotta, honey, and nuts.

The recipe is popular in Italy, where all of the above ingredients are common. But nowadays it’s not a problem to buy fruit and cream cheese, at any time of the year, so the sweetness is available to almost everyone. I have previously tested several variations of baked pear desserts, but this is the first one that impressed me with its flavors so much that I wanted to share it.

For the cooking we need large sweet pears (3 pcs.).

They should be hard enough, and in no way soft, like rotten pears. I tried several options, and settled on large green-yellow pears, which still have a reddish flank when ripe. They are moderately sweet, have a nice flavor, and become soft when baked, but they hold their shape and don’t spread out on the baking sheet. Wash the pears well and cut them into halves.

Next, we pick out the core with a spoon. Since the fruit is quite large, I use a tablespoon, with which I pick up the middle of the fruit, and scroll through 360 degrees.

We also cut the stalk and the butt with a knife, so that nothing interferes with the enjoyment of the dessert.

If you want to keep the whiteness of the cut pear surface, smear it with lemon juice. This way, even after baking, the fruit will look much prettier.

Now let’s move on to the filling. I did a little work on it to get the perfect balance of flavor. Many people put the ricotta untreated or just mixed with nuts, but that’s not how we do it. To make the mixture incredibly tender and tasty, we whip the whole ricotta (250 g) with a blender, along with the walnuts (25 g), spices and sugar (2 tbsp). I suggest blending just the walnuts for a few seconds at first, so as to grind them as much as possible, and then add the other ingredients.

I use cinnamon (1.5 tsp), nutmeg (pinch) and vanillin (pinch) as spices. If you want to make a healthy dessert with pears, replace the sugar with the desired amount of sweetener or sugar substitute.

After whipping the whole mass until homogeneous, you get a stand-alone sweet that you can make for yourself and your guests. But we move on to the next step.

If you don’t have ricotta on hand, substitute it with 9% cottage cheese. And don’t forget to add a pinch of salt while beating to balance the flavor.

Start stuffing pears with ricotta mousse. To do this, fill the mass in a spoon and place it in the recess of the fruit.

Depending on how much space the core took up, you may get small humps or a flat surface. The main thing is to have the same amount of filling in all the pears.

On top, pour honey over the stuffed pear. If it is thick or candied like mine, melt it in the microwave or in a water bath.

Do not pour too much honey, so as not to make the dessert sugary, so draw a few lines on one half of the pear and move on to the next.

The final touch is a sprinkle of cinnamon. I suggest sprinkling liberally over the entire surface of the pear, but without the slides, otherwise the dessert can get spicy.

You can bake the pears with ricotta on a baking tray or in a heatproof dish. I will use a ceramic dish, greased with butter beforehand.

This is done so that the pears do not stick to the pan. This will not affect the final taste. Put the dessert in a preheated 180° oven and leave for 25 minutes.

During this time, the pear will fully bake and become soft, and all the flavors and aromas will mingle with each other.

It is better to eat baked pears with ricotta warm, as the dessert in this state is more juicy and flavorful. Although some people prefer the version after the fridge, when the dish has infused and the mousse has become more dense.

I suggest you determine which form of pears tastes better to you, and then write in the comments. As a decoration, you can sprinkle the dessert with chopped walnuts.

And I also remind you that if you want, the dessert can be made completely dietary, so people on a diet will love this sweet treat.

Leave feedback Cancel reply
About us 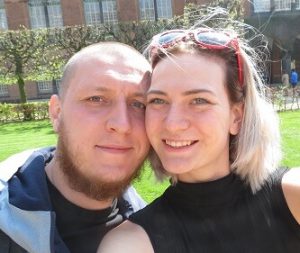 For over 6 years we have been personally experimenting with the old ones and creating new recipes for tasty, beautiful and healthy food.
We also learn English and try to share our experiences and local recipes with the world.